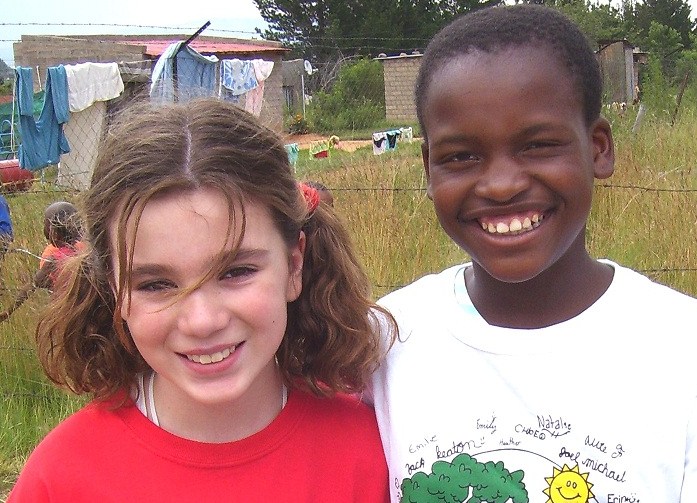 The Sesotho word for “sister” is “ausi”. In Lesotho, people address each other by their role, followed by their name as a form of respect. Let me introduce you to Ausi Esther. She is the best sister these orphans could ask for.

Esther is one of Godwill and Hilda’s own children. She was 11 years old when we visited Rachel’s Home in 2009. From the moment we first got off the bus, she was very friendly and outgoing. Her smile was warm and contagious. I introduced her to my daughter Grace, who had just turned 10. Esther decided right there and then they would be friends. From then on, they seemed inseparable. Esther led Grace by the hand wherever they went. I would often see her braiding Grace’s hair or inviting Grace to join in games with the other children.

When Grace became ill one day, Esther was genuinely concerned about her friend and kept close tabs on her.

Esther has a beautiful singing voice too, and she often leads the children in song during worship and play. Joy radiates from her; her smile belies the conditions of the orphanage. Esther seems more mature than her years. Despite her youth, she has a tremendous amount of responsibility placed on her. In addition to helping with the household chores, Esther plays a huge role in nurturing the younger children. We never saw her complain though; it just seemed natural to her.

Esther gladly took on the role of “big sister” to Grace. She showed true Christian love in everything she did. Chores and games alike; she did them all with a cheerful heart. Despite the poverty, she displays a joy that only comes through a relationship with Christ. She was and still is an inspiration to me.

Even a year after our trip, the memory of her smile and her fun, easy-going nature continue to warm my heart.