Local Women Reach out to Help 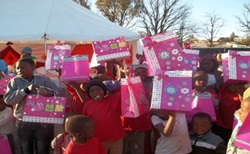 August was Women’s Month in Lesotho.

As part of a celebration of the role and work of women in Basotho society, Hilda and the children were invited to attend ceremonies in Maseru. While there, a local woman decided to celebrate her birthday with the children of Rachel’s Home. It was a beautiful day and the children enjoyed themselves. Instead of receiving gifts, she chose to give to the children. This generous act gave the children a rare and special day of joy.

Hilda frequently finds herself at the front door of the orphanage confronting a pair of police officers. They often have a child in tow that they are hoping Hilda will take in. Recently a pair of Police women showed up at the orphanage. They didn’t have a child. Instead they had brought gifts for the children. God had touched their hearts reminding them that they too are mothers and that these children have nothing. Along with the gifts, they brought instruments and food. The day was filled with music and laughter.

These are the moments that change lives.