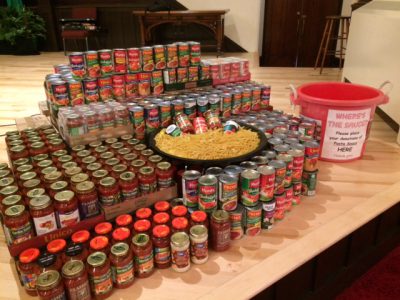 Yes, well it might be time to get a bit saucy.

We collected 99 cans this week to bring our total to 832 cans. That was no-where near 1 can per person and that’s just not good enough.

I remember one Thursday when I volunteered at the Food Bank. A young woman came in. She was working her way through college to become a paramedic. She had just finished a day at the college and she arrived still wearing her uniform. She had a young child and she was working hard to build a better future for herself, for her child and for her community. The Food Bank gave her the tools she needed to build that future. That was several years ago and I don’t know where her story went from there. It is entirely possible that you may need an ambulance and that one of the paramedics that care for you, stabilize you and take you to the hospital may be that woman. When we help people reach their potential, the whole community benefits.

So, let’s get going! One can per person per week is not a big deal. It’s not much to ask. Let’s make a difference in our community. Let’s do this!