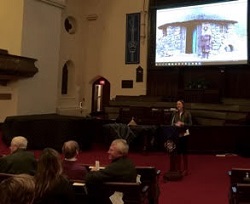 Sunday February 7th was a special evening at Central. More than 70 people attended an evening of fellowship and inspiration.

Stephanie Vizi hosted the evening, presenting her documentary “Mamosala: Being a Young Mother in Lesotho”. Steph has been part of our team from the beginning and she spent a year in Lesotho, with Help Lesotho, walking alongside and working with young people like Mamosala. This documentary followed the life of Mamosala and introduced us to the many obstacles and struggles that face young women in southern Africa. The story of Mamosala opened many eyes and touched many hearts.

Afterward, Steph re-introduced the audience to Central’s mission in Lesotho.

Our mission in Lesotho began with Rachel’s Children’s Home. Rachel’s Home is an orphanage for the child victims of Lesotho’s AIDs epidemic. Lesotho, one of the poorest countries on earth, has the second highest HIV infection rate in the World. Almost half of all young women in Lesotho are infected. More than 200,000 children in Lesotho have lost both parents. They are, to use a very ugly term, double orphans. Life for the orphans of Lesotho, is very precarious. Without the shelter offered by places like Rachel’s Home, many simply don’t make it.

The story of Rachel’s Home is one that is very familiar throughout the Majority World1. One day, Hilda Seforo, a local woman living in Maputsoe, found an infant abandoned at her front door. She and her husband took the child in, named her Joy and raised her as their own. Soon word got around that Hilda and Godwill would take in orphaned and abandoned children. Their little family grew into what became Rachel’s Children’s Home.

Why Rachel’s Home and not Hilda’s Home?

Well, the name comes from Matthew 2:18 “A voice is heard in Ramah, weeping and great mourning, Rachel weeping for her children and refusing to be comforted, because they are no more.”

Hilda saw so many lost children, so much suffering, so much death and despair, that it broke her heart. Indeed, without Rachel’s Home, many of these children would be no more.

This is how so many orphanages throughout the Majority World get started. Local people take it upon themselves to help the many orphaned and vulnerable children living in their midst. With little more than the prayers and financial support they receive from groups like ours, they make a difference in the lives of children in their communities. 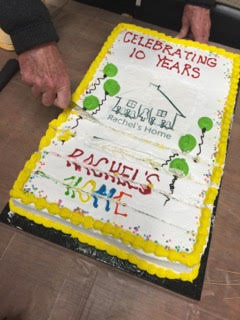 Central has been at Rachel’s Home for 10 years. We’ve twice sent teams there to show our love and support and we’ve walked the journey with them, through good times and through bad. As we mark our 10th anniversary in Lesotho, we look forward ,with your support, to continue that walk and continue to help Hilda and Godwill make a positive difference in the lives of the children of Rachel’s Home.

Over the years, our efforts have reached beyond Rachel’s Home.  We’ve supported graduates from Rachel’s Home as they’ve moved on to high school and university. We’re currently supporting four young people attending high school. In Lesotho, high school is not free. It’s very expensive and far beyond the reach of the many orphaned and vulnerable children of Lesotho. Without the support of Central, these four young people, graduates all from Rachel’s Children’s Home, would have no hope of completing their education and building a better future for themselves and their community. But, with your help, we can build a better future.

On behalf of the Missions and Outreach Committee and our committed team of volunteers, we’d like to say thank-you to everyone who continues to support our efforts.

1Majority World, though it has a slightly different connotation, is synonymous with Third World. I like to use this term because I think its important that we constantly remind ourselves, that we have been blessed to live in our little corner of the World. Most of the World is not like Cambridge. We have poverty here too, but nothing like what the majority of the World has. We are blessed and we must share that blessing with our less fortunate brothers and sisters both here and around the World.