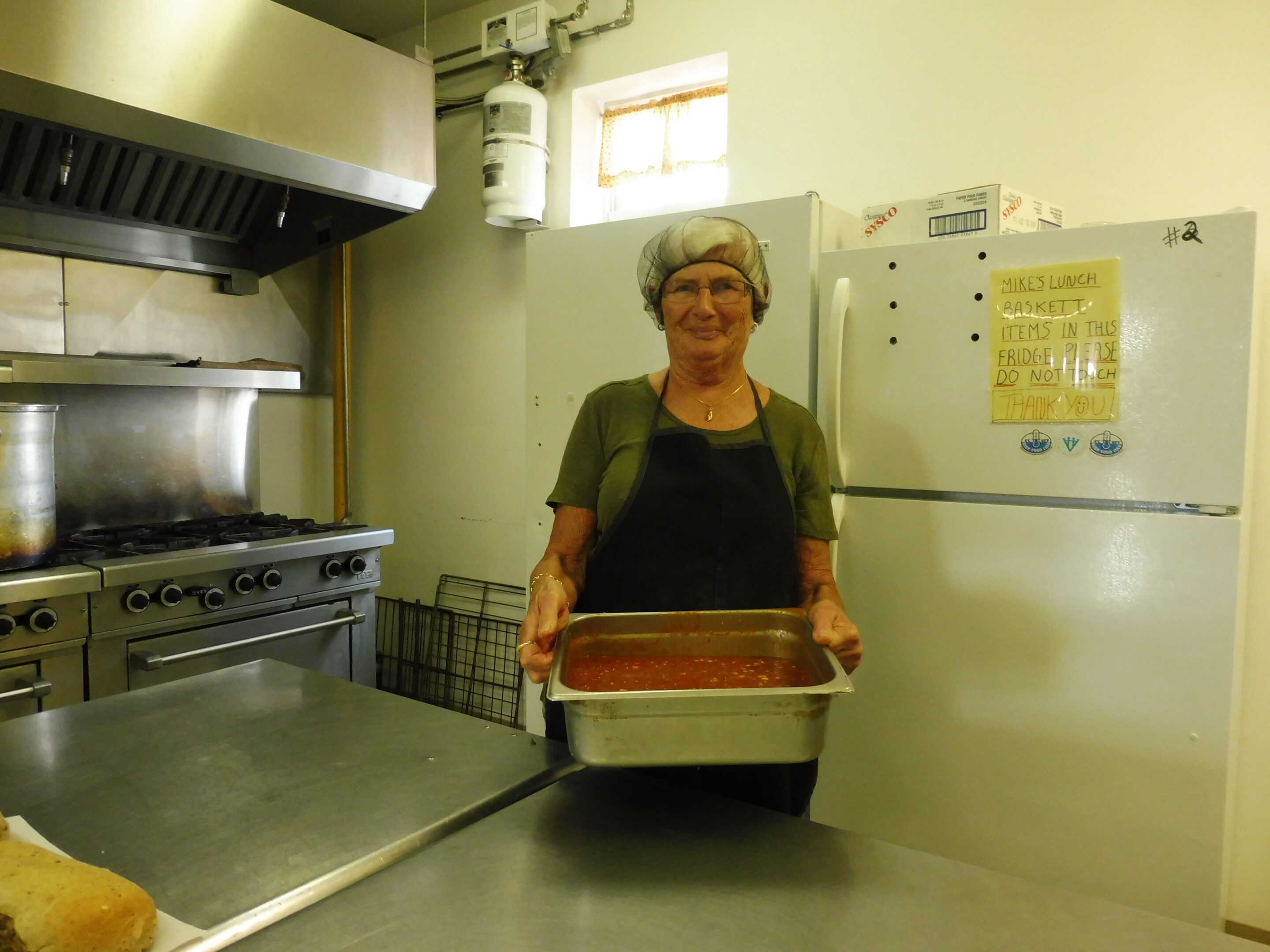 Certainly not our Saturday in December!

When Central’s team arrived to help prepare and serve a hot meal at Mike’s Lunch Baskett, they were met by Pat Singleton, the Executive Director of the Cambridge Self Help Food Bank. Pat, limping with a cane and in obvious pain. Carol and her trusty helper, Heather had the day off and an emergency had prevented the replacement cook from coming.

Pat had ordered the food for the meal to be delivered to the kitchen, but it was nowhere in sight, so first it was quite a scramble to find the supplies in the warehouse walk-in fridge and freezer.  The meal was to be served from 11 -1 and usually the cook had the main dish started for us and the menu planned with the supplies needed already in the kitchen. We would then continue prepping and cooking. We couldn’t find the frozen corn in the freezer downstairs but decided we could always come down and find some canned vegetables.

We quickly set three of our team cutting potatoes very small and cooking and mashing them in small batches so we could have some ready for 11:00. Others sliced the hams which were luckily just thawed and got them warming in the oven. We found some frozen corn in an upstairs freezer so that was really helpful and got it cooking. Others got the stove top stuffing made, gravy heated, buns buttered and pickles put out. We set up the tables and chairs and the serving table and announced to the understanding and patient guests we would be ~15 minutes late getting started serving.

Two of our September team members – Gerda and Grace

Some more problems occurred. First, the dessert, a variety of fresh pies, was coming from a supplier in Paris and was delayed due to snowy roads. Second, the big coffee urn decided to pack it in. Luckily June Anderson, the Spiritual Care provider, arrived and brought in a Tim Horton’s coffee maker, quickly getting some coffee going for the guests that came in out of the cold for a hot drink before the meal.

The lunch of ham, mashed potatoes, stuffing and gravy, buns, frozen corn, pickles and pie were very much appreciated by~70 thankful people. Extra food was taken to the Intermediate Christian Home where it was shared with the guests there and others in need. What a busy day and an amazing team! We would like to give a special thank you to Nathan, teenage son of Don Willis’ friend, who worked so hard doing a lot of the heavy lifting and also is earning school volunteer hours. After finishing the clean up and dishes, this had been the busiest Saturday ever and a tired team went home about 2:00 p.m. knowing they had made a difference and God’s love had been shared in this place!